There are several definitions of culture that you can read about in an online dictionary. My favorite definition is the one by the Peace Corps.

Simply put, culture is made up of the practices and social customs of a group of people. As you can see from the cultural iceberg below, this includes almost every aspect of our lives, from food and art to things most people never think about, like the concept of time. It also includes the attitudes and behaviors of a social group, including how people use language and how they communicate.

Why is it important to learn about culture when you study a language?

Let’s look at two cultures (and languages) that are quite different from each other: Korea and the United States.

Korea is based on collectivism. Collectivist cultures’ concept of self is closely tied to groups.

We can see this in the Korean language and Koreans’ use of we, us, and our (우리).

Likewise, the United States is based on individualism. Individuality is highly valued and there is less reliance on groups.

The resulting concept of self is quite different than that of people from collectivist cultures.

We can see this in the English language. I, me, and mine are used much more in English than they are in Korean. Articles (a, an, the) are another aspect of language that reflects cultural values.

Another example has to do with the ways people agree and disagree.

Noonchi, Fitting in, and Getting Along with Others

In Korean, saying “no” directly is less common than it is in English. Koreans have an easier time understanding when “yes” means “no” because they have had years of practice developing this skill (with 눈치). In English, there is no direct translation of noonchi. It can be compared to having emotional intelligence and being socially adept and tactful. For example, if your friend just went through a breakup, and you started talking about how wonderful your marriage is, you would be lacking noonchi. It is also an awareness of your social roles and responsibilities. If an elderly person gets on a bus (or ANY person who is struggling physically) and you are sitting, you would get up and offer them your seat. That is an example of good noonchi. When it comes to culture, noonchi can go awry. What is appropriate in one culture may be inappropriate in another culture. If you are Korean and want to know more about this, you might enjoy reading about English and Korean language and culture differences to help you avoid looking like you lack noonchi.

In addition to not saying “no” directly, it is common to agree to negative statements and questions by saying “yes” (or other indirect ways that have the implicit meaning of “no”) in Korean. However, in English, we often (not always) agree to negative statements and questions by directly saying “no.” A good example of how this can be confusing is when using tag questions.

You can learn grammar. You can learn thousands of vocabulary words. You can have perfect pronunciation. But, if you don’t understand the cultural norms, values, and the way people within a culture communicate, it will be difficult to truly communicate naturally and connect with people from another culture.

This is a huge topic! To continue your journey beneath the surface of the Cultural Iceberg, take a look at some English and Korean language differences related to cultural differences. 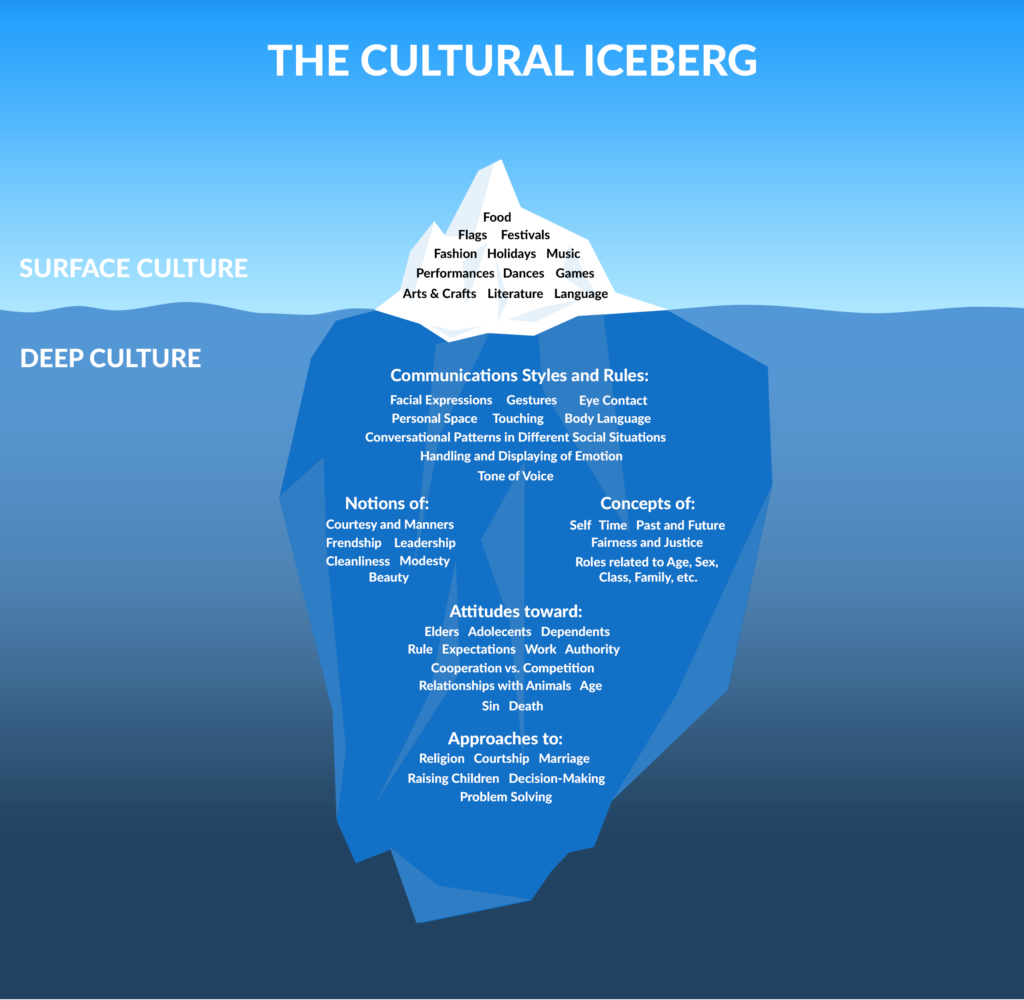